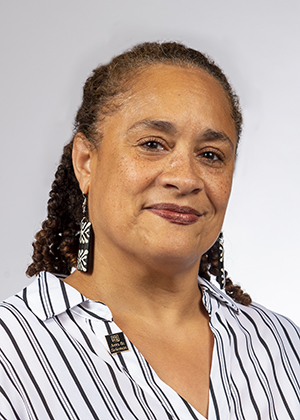 April Langley began teaching at the University of Missouri in 2001, when she joined the faculty as an Assistant Professor of English in the newly developed area concentration of African Diaspora Studies. She graduated summa cum laude with a B.A. in English from Mills College; she attended the University of Notre Dame and received her PhD in English in 2001. Langley specializes in eighteenth- and nineteenth-century African American and American Literature and Theory. Her courses include such topics as early black narrative forms (conversion, captivity, slave narration, travel, and spiritual autobiography), eighteenth-century Afro-British American poetics, and nineteenth-century black women writers. Her interdisciplinary research integrates African Diaspora literature, African, American and African American Studies, and Black Feminist/Womanist theory and criticism. She has published articles in The Western Journal of Black Studies, a/b: Autobiography Studies, bma/Sonia Sanchez Literary Review, as well as review essays for Legacy and Early American Literature. Her book, The Black Aesthetic Unbound: Theorizing the Dilemma of Self and Identity in Eighteenth-Century African American Literature (Ohio State University Press), explores the culturally specific African origins of the eighteenth-century Afro-British American literary and cultural self through a conceptualization of the dilemma posed by competing African, American, and British cultural identities. Additional book projects include Looking for Phillis, an in-depth study on the Senegambian poetics and oral traditions that influence the poetry of Phillis Wheatley. She is also a Phi Beta Kappa member, 2001 AAUW fellow, and a 2003-2005 Postdoctoral Fellow in African and Afro-American Studies at Washington University in St. Louis. Research and Teaching: 18th- and 19th-century Africana and American Literature, Religion, Gender Theory (Black Feminisms/Womanisms), Autobiography and Critical Theory.. She has been an affiliate of Black Studies since 2001, jointly apponted faculty in 2010, and served as Assistant Director of Black Studies Program from 2009-2013, until it officially achieved department status in 2013 in the College of Arts & Science, where she is currently appointed chair of the Black Studies Department. She is also an affiliate in the departments of Relgious Studies and Women and Gender Studies.